Health Education England has spoken to a number of AHPs who have previously worked in the armed forces to develop a suite of video and written case studies to share their real experiences making their step into a career in the NHS.

Developed as part of the collaboration between HEE and Step into Health, to raise the profile of AHP professions with armed forces personnel.

Suzanne Rastrick our Chief AHP Officer opened and provided the opportunity to see the work created, but also look at how we can attract a potential highly skilled workforce to become an AHP professional registered or non-registered. 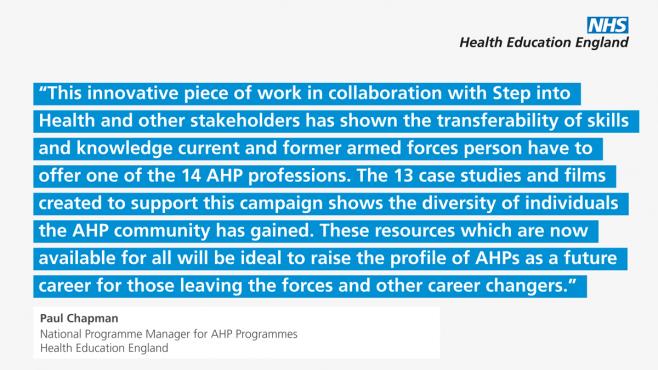 Jerome Atutornu served as a Logistics Specialist in the Royal Logistic Corps of the British Army until 2009. His career included working in the UK, Iraq and Canada.

Jonathan Cousins-Booth served eight years as a musician in the Royal Marines Band Service and when he planned to leave, he knew that he wanted a career where he helped people and made a difference in the lives of people who were struggling or disadvantaged.

Mark Bunce spent 22 years in 26 Regiment Royal Artillery, working with communications and computer systems. Although he still serves as a reservist with The Royal Yeomanry, he left the regular army in 2008  and was focused on finding employment which would enable him to support his family and maintain their lifestyle.

Dawn Ball joined the British Army at 17 and served a 22-year career. Dawn’s lifelong dream was to train as a Paramedic and she saw joining the Army as a way to gain some experience. Initially she worked as a Combat Medical Technician and her service included a tour of Kosovo.

Kenneth Gourlay was a Major in the Army working as an Engineering Officer on helicopters. When he left the Army at the beginning of 2013, he wanted a new career he enjoyed and where he was helping people; he wanted to both make a difference and be able to see that difference.

Lawrence Ambrose was a Radar plotter and seaman in the Royal Navy from 1988- 1993 with his service including the first Gulf war and a tour of the Antarctic, but when he left, plans for his next career were not foremost in his mind.

Andrew McMillian served as an Engineering Technician (Weapon Engineering) in the Royal Navy, before leaving in 2011. When thinking about his career outside the forces, his thoughts naturally focussed on using his existing skills and perhaps working as an electrician; a career as an allied health professional was far from his thoughts. 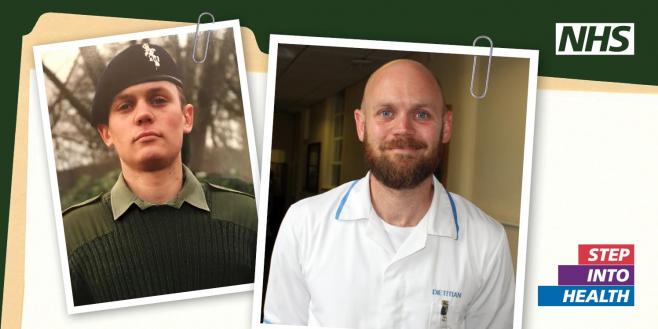 Ashley Smith was a trainee Electronics Technician in the British Army. When he left in 2000 he didn't have a clear idea of what career would come next but did know that he had a keen interest in sport, fitness and eating well; would it be possible to combine those interests into a future career?

Ben White was a Lance Corporal in the 9/12 Lancers regiment of the British Army, but when he left in 2005, he wanted a lifestyle over which he had more control, where he would be able to plan future events and not be at the ‘beck and call' of anyone else.

David Williams achieved a childhood ambition of joining the Royal Marines in 2012. He had always wanted to be in the military and thought he would have a long career there.

However, a series of injuries caused David to be medically discharged after only three years, and it was clear that he would have to start mapping out a very different future for himself.

Paul Wicklen was an Aircraft Airframes Technician with the Royal Air Force until 2006, when the toll of so much time away from his family was a driver in the decision to leave the forces and pursue a new career.

Steve Harris had a long career in the Royal Air Force, serving for 23 years as an Avionics Technician working on various aircraft types and workshops, including small systems I.T and test equipment calibration and control.

Victoria Hain was an Officer in the Royal Engineers until 2017 when she decided, after 17 years and a fantastically varied global career, that it was time to leave.

Read our case studies to learn about real experiences that members of the armed forces community have had in making their step into a career in the NHS.