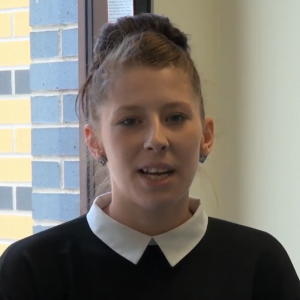 Jamie-Lee Neilson started an Apprenticeship in Business and Administration at Hull and East Yorkshire Hospitals NHS Trust in 2013. This video shows her discussing the incredible personal journey she has undertaken over the past two years and shows how important apprenticeships can be for both employees and employers alike.

In January 2013, Adam was recruited as an Apprentice Mould Room Technician to work in the Mould Room within their Radiotherapy Physics Department – he was the first Apprentice in the department.

Charlie Brown is a 19-year-old Advanced Medical Engineering Apprentice from Leeds. Charlie started his A Levels but quickly realised that he wasn’t enjoying his courses and he decided that remaining in the school environment was not the right choice for him.

Charlie is currently undertaking a four year Advanced Medical Engineering Apprenticeship in partnership with Leeds Teaching Hospitals NHS Trust and its training partner JTL.  He learning how to maintain and service critical hospital equipment such as X-Ray machines and Linear Accelerators used for radiotherapy treatment.

During the first two years of his apprenticeship Charlie attended Kirklees College in Huddersfield on a day release basis and successfully completed a Level 3 BTec in Electrical and Electronic Engineering.  Charlie has now begun a Healthcare Science foundation degree (FdSc) at the UWE in Bristol. This is a distance learning course that will take Charlie two years to complete.

How did you end up doing an apprenticeship?

I did my first year of A Levels but as the year progressed I felt it wasn’t for me. I didn’t find the content of my lessons or courses interesting and I realised I needed to look for an alternative. I was also keen to start earning some money whilst continuing my education. I applied for an apprenticeship elsewhere, but whilst doing that I heard about this opportunity with the NHS. I thought it sounded really interesting and was something a bit different, so I applied and was accepted.

What did your job role involve?

My role involves learning how to maintain and service medical equipment across St James’s University Hospital and The Leeds General Infirmary. The equipment that I work on is really important and varied, such as X-Ray machines, Linear Accelerators and patient connected monitoring equipment. I am also being trained to maintain and manage the clinical computing equipment that interfaces and controls many medical devices. What I do is really important because it enables the doctors and nurses to do their jobs and treat patients.

What is your favourite thing about your apprenticeship?

I really enjoy getting the opportunity to spend time in different hospitals. It means that no two days are the same and there’s lots of variety. I work as part of a large team and there’s always somebody to help me or to offer their advice. It is very rewarding to be part of a team that works with other healthcare staff to provide safe and effective care for patients. The apprenticeship also enables me to get where I want to be and gain skills and recognised qualifications without getting myself into debt.

Charlie, what’s next for your career progression?

As part of my apprenticeship I’ve been able to start a Foundation Degree in Healthcare Science. The foundation degree will take two years to complete, but within the next year I will also have built up enough experience to start applying for jobs in Medical Engineering. It’s great knowing that I’ve got the opportunity to get a Foundation degree and, with the practical hands on skills that I am learning, I will be in a good position to progress my career in Medical Engineering.

About the Advanced Medical Engineering Apprenticeship:

During the Advanced Medical Engineering Apprenticeship, apprentices can expect to be sent on varied work placements throughout the Medical Physics and Engineering department. Apprentices are trained by experienced clinical technologists to be proficient in the use of both hand tools and machinery such as centre lathes, milling machines, pillar drills and also complex test and calibration equipment.  They are also taught how to design and manufacture bespoke products for use in both servicing and clinical applications. As well as being involved in the servicing and repair of diagnostic, monitoring, computing and treatment equipment, apprentices also attend and observe clinical procedures and gain a patient’s perspective and clinical appreciation of how medical devices are used.

How did you find your apprenticeship?

I finished college but I really didn’t know what to do next. Initially I thought about University, but I wasn’t convinced it would be for me. I started looking at lots of different job websites to see what was out there. I hadn’t considered the NHS and I didn’t even know they offered apprenticeships, but when I saw the outline of this apprenticeship I was really interested.

How long have you been doing your apprenticeship?

What does your apprenticeship involve?

My apprenticeship is really varied, so no two days are the same! Technology enhanced learning is about using technology to support learning, so part of my role is helping to create e-learning courses, interactive digital media and videos for learning. One day I’ll be designing and making posters, the next I’ll be filming with our Chief Executive.  I’ve recently been involved in filming footage and creating images for prospectuses. The last one I helped create was over 80 pages long.

What do you enjoy most about your apprenticeship?

I really enjoy working in a busy office environment and learning as I go. I didn’t think that an apprentice would get the opportunity to be as ‘hands-on’ as I am and I feel like I’m learning a lot from the team.  I was recently invited to my first conference. I’d never been to one before and that was a really interesting experience.

What’s next for your career progression?

I’m really enjoying the apprenticeship, so I’m hoping that it will lead to a permanent role in the Technology Enhanced Learning Team.

About the Technology Enhanced Learning Apprenticeship

As part of the Technology Enhanced Learning Apprenticeship, apprentices learn how to research, plan and create videos, web content, photography and other digital media productions to enhance learning on Basildon and Thurrock Hospital’s dedicated virtual learning environment ‘ULearn’ or the Trust’s Intranet site. Apprentices undertake a Level 3 Diploma in IT Professional Competence which includes; Customer care, System operations, Website & Imaging Software, Using email, Technical advice and guidance, developing own effectiveness and professionalism as well as Health and Safety. The second part to the framework is Level 3 Diploma in ICT Systems and Professionalism which includes; Web fundamentals, Web development, e-Commerce as well as Communication and Employability skills for IT. All of this is designed to give the apprentice the skills they need to progress their IT career.

Dylan Connolly is an 18-year-old Modern Apprentice in Cellular Pathology from Preston. After moving to a new city after his first year of A-Levels, Dylan realised he’d lost interest in the subjects he was studying. Instead of starting again at a new college, Dylan decided to make use of his passion for biology and applied for an apprenticeship.

Dylan started his apprenticeship in Cellular Pathology at the Royal Preston Hospital in 2016. He is responsible for helping to assisting at post-mortems on patients and releasing bodies to undertakers, as well as testing samples in the hospital’s laboratory. As part of his apprenticeship, Dylan is studying for a BTEC level 3 in Science at his local college and a laboratory-based NVQ 3. He is looking forward to learning as much as he can during his time at Royal Preston and hopes to apply for a place on a university course in Biomedical Science on completion of his apprenticeship.

I’m 18. I started my apprenticeship about six months ago.

How did you end up doing an apprenticeship?

I went to school in Stoke and did my first year of A-Levels. My family moved to Preston shortly after, so I was faced with the choice of starting again at a new college, or looking at my other options. I didn’t enjoy my A-Level courses and I just wasn’t passionate about them. It became harder and harder to find the motivation to do the work, so I decided that carrying on at college wasn’t the right option for me. I’ve always been interested in biology, especially Pathology. I saw an opening for an apprenticeship at the Royal Preston Hospital, applied, and was successful. I’m really passionate about my apprenticeship because I’m training in something I’m genuinely interested in.

What did your job role involve?

As I’m fairly new to the apprenticeship, I spend most mornings working in the hospital’s mortuary. My main tasks are assisting at post-mortems on patients and releasing bodies to undertakers. Post-mortems are carried out by pathologists to determine the cause of death. It’s a really interesting sector.

In the afternoon I usually go up to the laboratory where I work alongside qualified pathologists in the “Cut-Up” section. Here, we test tissue samples from organs like colons, uteruses and kidneys. Our tests are used to diagnose major diseases like cancer, and lower-risk conditions like cysts.

What is your favourite thing about your apprenticeship?

I really enjoy working in the mortuary. It’s a really privileged job - most people would never get to see a post-mortem in real-life. I’m learning something new every day.

Dylan, what’s next for your career progression?

At the moment I’m at college as part of my apprenticeship, doing a BTEC in Science. I’m also getting my NVQ for working in the lab.

Once I’ve finished my apprenticeship, in about a year and a half, I’m hoping to apply for a place at university to do a degree in Biomedical Science.

About the Pathology Apprenticeship

As a Modern Apprentice in Cellular Pathology, the apprentice will be responsible for a range of laboratory-based pathology tasks, using a range of cutting edge scientific technologies. Apprentices will work in both a laboratory and the mortuary, with tasks such as passing instruments like scalpels to pathologists, taking tissue samples, weighing organs as they’re removed from a body, taking samples for lab analysis and recording the findings of a post-mortem exam. In the laboratory they will be responsible for assisting pathologists with testing samples for diseases and abnormalities. As well as their work within a hospital, apprentices will attend college to gain BTEC level 3 and NVQ 3 qualifications. On completion of the apprenticeship, apprentices are often qualified to apply for a university place or in the future may be able to undertake degree level training via the apprenticeship route.