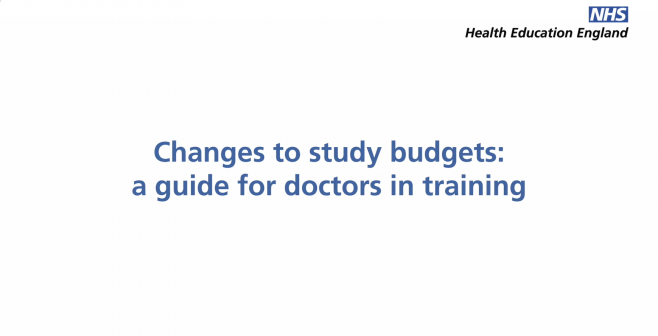 Through our work on Enhancing Junior Doctors’ Working Lives, trainees told us that they were frustrated with the system for accessing their study budget.  They reported that access to the budgets was inequitable between specialties and locations, and that in many cases they paid for educational activity themselves.

In response, we are moving away from a ‘notional individual annual allocation’ of study leave funding that varies across each local office. Our new system will support:

Our heads of schools and training programme directors will monitor and evaluate the range of funded educational activities undertaken by trainees, to ensure that it is fit for purpose, providing quality and value for money.

An overview detailing the HEE-wide approach to study leave is available below. This guidance document has been developed through consultation with trainees, their representative bodies, colleges, specialty advisory committees and faculties.

A national study leave appeals process, with accompanying appeals form, was developed in 2020 and is now in use across HEE. Find details and the form in the drop down section on this page.

View our guide to accessing centralised study budgets on the specialty training website.

Public health trainees are outside the scope of the new arrangement.

We have agreed to closely monitor use of the resources to ensure value for money and equity. We have recently published a formal annual report focused on activity across 2020-2021.

Trainees should endeavour to obtain a refund for any pre-booked expenses. If they unable to do so we will honour the claim, but they should provide evidence when they submit their claim that the expense was non-refundable.

All requests for study leave time not taken during the outbreak will be properly considered by the employers and Postgraduate deans and will be subject to the need to maintain NHS services, and training requirements for completion of programmes.

When organisations cancel courses and training, can the Postgraduate dean and their team please ensure that provision for essential courses such as ALS is still available to ensure patient safety remains a priority.

We are asking all parties to be flexible both during and after this difficult time.

The below outlines the national study leave appeals process that should be used for all doctors and dentists in training within Health Education England (HEE). HEE acknowledges the work of several local offices whose local documentation was used as the basis for this HEE-wide document; the appeals process (London) and appeal form (West Midlands)

The Post Graduate Dean in each HEE local office is responsible for ensuring that the study leave budget and the rules regarding its use are implemented in a fair and transparent way in line with the national study leave principles which are outlined in our overview document.

The study leave process provides a mechanism by which trainees can appeal against a decision where they have evidence that the process that led to the decision was not followed correctly; or that there appeared to be bias, resulting in unfair treatment; or that new information has been made available that was not known at the time of the original decision and may have influenced the outcome.

If a doctor or dentist in training disagrees with a decision about study leave, they should in the first instance contact the relevant authoriser that refused the application to request an explanation / review.

If a doctor or dentist in training remains of the opinion that the wrong decision has been made, they can appeal against the decision using the national appeal form which can be found linked below. The completed appeal form should be sent via email to the Postgraduate Dean (or their nominated deputy) as outlined on the website of the specific HEE local office. The appeal form must clearly state the reason(s) for the appeal, including any new evidence that may support the appeal process.

Anonymity for appellants will be maintained wherever possible unless the individual confirms their consent to waiving this on the form.

Appeals should be submitted within four weeks of the date that the original decision to refuse study leave was communicated to the trainee. Failure to do so will mean the appeal will not be processed.

Appeals will then be considered by a panel convened within the local office that will include a senior member of the PGMDE team, a trainee representative and the Postgraduate Dean or nominee.

Appeal panels will consider the information submitted on the form and the appellant is not required to attend. The appellant can however request to attend the panel (with or without support, e.g. trade union representative) but must make that clear at the point of submitting their appeal form.

The doctor or dentist in training will receive a response to their appeal via email within 20 working days of submission with the result of the appeal outlining the reasons for the decision reached.

The decision resulting from this appeals process is final and there will be no further right of appeal.

As part of the ongoing development of the Trainee Information System (TIS) for Study Leave, HEE will work to create the ability to capture data on appeals to enable anonymised reports to be analysed.